Ten days ago, the Harvard Global Health Institute published data looking at how many tests each state should be doing as part of their strategy to begin a slow re-opening around May 1, based on the size of their coronavirus outbreak at the time.

Ten days is a long time in a pandemic. As new localized outbreaks are being discovered while others are being brought under control, and some states are beginning to open up while others are remaining closed, it is time to re-run the numbers and take a fresh look ahead.

Partnering with National Public Radio, we are publishing an updated version of our model of projected state testing targets today, looking at how many tests we think each state should be ready to perform by May 15.

The numbers are sobering: Overall, our need for testing has only increased over the past weeks. Fewer than a dozen states have gotten ahead of this virus. 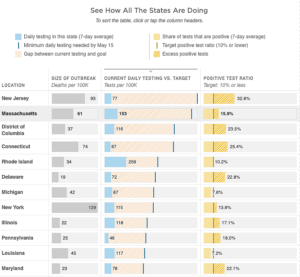 How we got here

Every day, we receive dozens of requests from both newsrooms and state officials looking for guidance on how to think about testing targets in the United States. After publishing a minimum number of required tests for the nation in mid-April–to show the gap between average daily testing at the time (around 150,000 tests daily) and what was needed (at least 500,000 tests daily)–we saw the power of such a number: It provided a guidepost for states and the nation to know what to work towards.

Of course, we are not the only ones projecting how many tests will be needed. Other great reports and estimates are available here and here and here. That’s a good thing. Modeling is by definition an inexact science: It combines the evidence available at the time with our best assumptions and deductions. We need many smart minds to iterate on this important question. Testing, combined with contact tracing and isolation of those who test positive, remain among the most essential tools we have in this fight against an elusive pathogen.

As of this week, national testing is still stalled at around 250,000 daily tests. So while the estimates between groups vary, the bottom line remains: We need a lot more testing. According to our updated calculations, we will need upwards of 900,000 daily tests nationally by May 15.

But national numbers don’t tell us enough about the testing needs in each state. The outbreaks vary greatly across the country, both in size and where a community is on the trajectory from initial infections to hospitalizations. It’s not a one-size-fits all question.

Our latest numbers provide up-to-date testing target estimates for each state by May 15 — based on what we know about the outbreaks in each state on May 6. Let’s remember that like our publication ten days ago, these estimates provide a snapshot of a moment in time, and will change in the coming weeks based on how states are able to curb their outbreaks.

In our data guide below, we provide a complete breakdown of the source data, evidence, and deductions that went into our model.

5 ways to utilize these numbers in each state

Let’s also talk a little more about how to interpret these estimates, and how they can inform state responses.

Population: Population of the state in millions of people. Taken from American Community Survey data

May 15 Symptomatic Cases: Number of new symptomatic COVID-19 Cases on May 15. Calculated as 0.75 * May 15 Cases. This is based on CDC estimates that 25% of COVID-19 cases are asymptomatic.

May 15 Contacts: Number of contacts to test based on new infections on May 15. Calculated as 10 * May 15 Symptomatic Cases. We assume that we will initially test all symptomatic people thus we will only identify symptomatic cases and thus only will trace contacts for symptomatic cases. Estimates of number of contacts vary widely but given some measure of continued social distancing it has been estimated at an average of 10 contacts per infected individual.

Other Influenza Cases on May 15: How many non-COVID symptomatic cases we expect to see on May 15. In previous years, CDC Historical Influenza Surveillance found that in mid-May on average, about 1.6% of provider visits were for Influenza-Like Illness (ILI). The CDC also reports 883.7 million provider visits per year. Dividing these by 365 and multiplying by 1.6% we find about 38,000 ILI cases per day. We then divide these across states proportionally by population.

Total Tests (Contact Tracing and Isolation): Estimated number of tests needed given a strategy of testing all symptomatic individuals and contacts of those with positive tests. Calculated as the sum of May 15 Symptomatic Cases, May 15 Contacts, and Other Influenza Cases on May 15

Total Tests (10% Positive Rate): Estimated number of tests given a strategy of reducing the positive rate of testing below 10%. Calculated as 10 * May 15 Cases. A 10% positive rate or below is the goal provided by the WHO; other experts have shown that a positive rate above 10% suggests inadequate testing.

State Snapshot: California - A Tale of Two Cities
Analysis: Find out if your state falls short on testing needed to open up in early May
America Needs to Radically Rethink Our COVID-19 Testing Approach