Evidence Roundup: Why positive test rates need to fall below 3%

According to epidemiologists, “epidemic control requires detecting even minor symptoms and testing the immediate contacts of those who test positive” or, more generally, catching any who may have been exposed, including asymptomatic people. Acquiring stable prevalence information requires that “the testing strategy moves beyond close contacts.”

The empirical evidence differentiating countries that have succeeded at disease control for COVID-19 from those that have not suggests that test positivity rates are an important indicator. Countries that are successfully finding and isolating  cases of COVID-19, and driving case incidence back to near zero, achieve low test positivity rates as part of their work. See this graph from Tomas Pueyo: 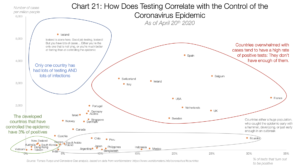 Importantly, test positivity rates provide valuable information only if testing is broadly accessible with uptake across all zip codes. If some zip codes are not represented in testing data, then there may be a hole in the surveillance net. The reason to look at zip codes rather than jurisdictions is that there can be great divergences in patterns of exposure and participation even at this level, deriving from uneven access to healthcare and health insurance.

There is now a growing consensus that driving the test positivity rate downwards of 3% should be a priority. The WHO initially suggested a positivity rate of around 3–12% as a general benchmark of adequate testing, and has most recently recommended that test positivity should remain at 5% or lower for 14 days before regions reopen.

In the U.S., comprehensive use of the top four layers of testing in the graph below would be likely to bring us a test positivity rate in the vicinity of 3-4%. 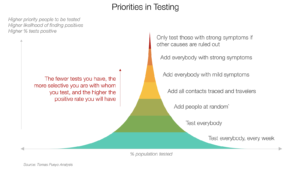 However, in countries that have successfully suppressed the disease, low positivity rates indicate that risk targeting has been appropriately broad, that testing supplies are sufficiently available, and that there is broad access, not that there is a lack of targeted testing. The positivity rate should be triangulated with other measures, such as determining the percent of contacts traced, the ratio of test positives coming from targeted testing and tracing, rather than from symptomatic patients, and the range of zip codes represented in testing data.

South Korea, for example, pushed their test positivity rate down to 3% immediately after their peak caseload in late February, while concurrently ramping up their contact tracing and targeting program, and have now decreased their positivity rate to less than 1%. Similarly, New Zealand has paired a comprehensive tracing program with a consistently <4% positivity rate (and falling). As seen in Figure 1, other successful countries, such as Australia, Taiwan, and Vietnam, have similarly maintained a <4%, and in most cases, a <3% positivity rate. In the US, we have seen a <3% positivity rate achieved in some states, notably in Rhode Island.

Figure 1 (Source: Our World in Data) 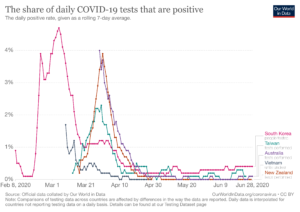 Figure 2 (Source: Our World in Data) 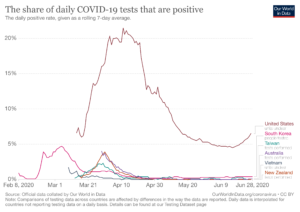 While the US test positivity rate (seen in Figure 2) and more regionally-specific assessments of testing have been falling since early April, increasing test volumes must be paired with other performance indicators for test targeting and tracing, as in the successful programs abroad, to suppress the disease. At the end of the day, what matters is not simply the volume of testing but rather what is done with the knowledge gathered from the testing.

The CDC is conflating viral and antibody tests. Here's what you need to know
Building Testing Capacity in Africa - 42 Countries and Counting
State Snapshot: California - A Tale of Two Cities