The numbers of cases and deaths from COVID-19 are surging in the south because states relaxed COVID-19 restrictions too soon, and not, as suggested yesterday by Robert Redfield, Director of the Centers for Disease Control, because of an influx of northern vacationers after Memorial Day. Redfield said that “everything happened around June 12-16” and that there was a “pop” in cases around June 12 to 16 in southern states, speculating that the cases resulted from Northerners driving south to vacation. This is not what the data say.

Here is how we know this:

Let’s just assume, for a moment, that Redfield was correct. If Northerners traveling in early June had seeded the spikes, as Redfield said Tuesday, we would expect to see cases suddenly rising across southern states around June 12th.

That is not the case: In southern states that are currently seeing large outbreaks, infections started rising around June 1st.

Below are two examples, from Nevada and Florida. Texas, Arizona, and South Carolina were also among states that saw an increasing number of cases by June 1. 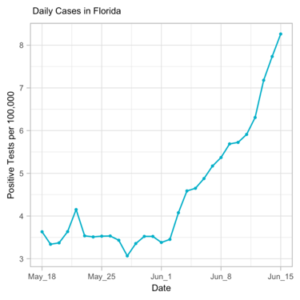 The outbreaks in Florida and Nevada began prior to or just after June 1.

Remember that there is always a lag between when infections occur and when they begin to be diagnosed. This means that the increase in confirmed cases around June 1 comes from infections occurring around May 24, right around the Memorial Day weekend (and well before mid-June, as Dr. Redfield suggests.) So the data show that these outbreaks started before Northern vacationers supposedly traveled South.

There is another problem with the idea of surges being seeded by Northern travelers: Cases also began rising in Alaska, Idaho, and Oregon around June 1, about the same time as in southern states. Those states also opened up early – but they don’t see a lot of travelers from the North in late May or June.

For Dr. Redfield’s theory to be true, it would also mean that travelers from up north somehow suspiciously bypassed Virginia entirely, a state that showed declining case counts in the weeks following Memorial Day. 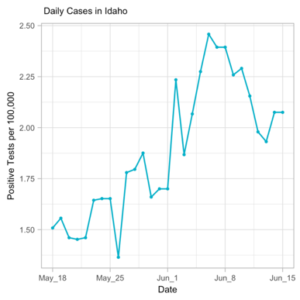 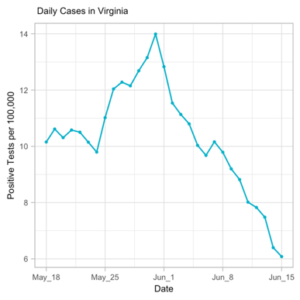 While cases surged in Idaho in the weeks following Memorial Day, Virginia has shown a steady decline

These questions can go on: What happened to these vacation super-spreaders? Did they not spread the virus at all before leaving their northern homes for vacations? Did they conveniently remain in southern states just until they were no longer infectious, and then returned home without seeding any outbreaks in the north?

As long as we let the data guide us, the answers are clear: Northerners are not the cause of big outbreaks in the south. What the states that are seeing large outbreaks have in common is that they relaxed COVID-19 regulations around the same time in May, leading to the surge of cases seen in early June. Virginia, on the other hand, remained in phase 1 of its reopening through the end of May and has fared significantly better than its neighbors.

The key to this exercise in checking the data is that if the evidence doesn’t support an argument, we need to call it out. We can wonder if Dr. Redfield was looking at bad data, or learning the wrong lessons, but the main point is: Not letting data and evidence drive our analysis and decisions is harmful. Not paying attention to data requirements for safe re-opening (from the White House task force) led to opening up too early in some states, which in turn led to large outbreaks. These new outbreaks are taking lives, weakening the economy, and threatening our ability to return to any form of normalcy.

To suppress this virus, we need to collect accurate data, share it with the public immediately, and allow it to guide our responses. Drawing incorrect lessons, scapegoating, and failing to acknowledge missteps moves everyone further away from that goal.

For more on our work on the Path to Zero transmissions, check out these documents:

Do Isolation And Contact Tracing Work?
SARS 1 vs. SARS 2: Does the new virus live longer on surfaces?
The Economic Case for Robust Public Health Intervention to stop COVID